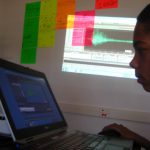 Radio Clubers at Clairton used MacBooks to assemble an Audio Mad Lib; using previous recorded clips of verbs and nouns, as well as the "body" of the Mad Lib (secretly recorded at the SLB studios), students built a finished Mad Lib in Adobe Audition. But, rather than conforming to boring, generic coherence, most of the students rendered their finished Mad Libs into Pink Floyd's "The Wall." 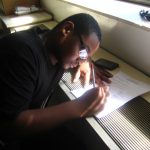 With the weather finally turning (sort of) and Spring seemingly right around the corner (right? RIGHT?), Radio Clubers allowed themselves to dream of short sleeve shirts, flip flops and sunglasses. After recording about what they planned to do when the fabled sun returned, they then had to make the difficult decision between being able to speak to animals or being able to speak every other language. 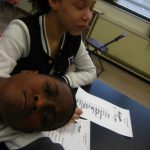 On our 3rd meeeting of CASTLE's Radio Club, students were given Mad Libs and tasked with imagining the strangest, silliest nouns and verbs they could think of. The first hurdle: learning what an adverb was. The second hurdle: pronouncing "Mad Lib."

Clairton CASTLE: “Who Am I?” Game 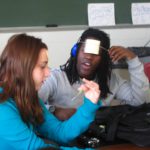 On our 2nd meeting of CASTLE's 2nd semester, we decided to collectively blow off some steam and play the "Who Am I?" game. Everyone was given a sticky note and tasked with writing down the name of someone or something famous/well known. They then passed their notes to the person on their right, who would then affix the note to their forehead. The students then took turns speaking into a H1 digital recorder and asking questions about who or what they were. 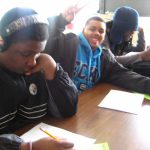 On February 11th, 2014, students at Clairton's CASTLE program were asked--with Valentines Day looming--if they could make a candy heart, what would it say? Would it be an expression of chalky-flavored love? A terribly good movie pun? Or just simply: "You're Weird?" Their answers will surprise you.

Clairton CASTLE: Three Things About Me 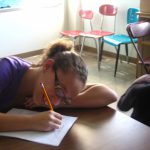 Radio Club's second semester at Clairton's CASTLE program has officially begun! Huzzah! To welcome our new cadre of Radio Club-ers we asked them three questions: "How do you think others would describe you?" "What do you like to do outside of class?" and "Would you rather be a werewolf or a vampire?" 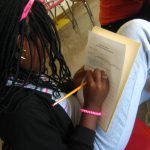 Radio Club is finally back from the holiday break, and to start things off we asked our students what were their New Years Resolutions. Many vowed to do better in school, while others aspired to achieve mayoral dominance; watch out Peduto, Leah is running on the three-minute-once-a-week-school-day platform. 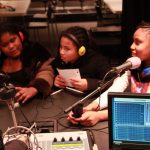 On our last day of Radio Club before the holidays, students visited The Saturday Light Brigade radio studio in the basement of the Pittsburgh Children's Museum. Once there, they recorded what they'd learned about building microphones, then sang some awesome karaoke of "What Does the Fox Say." 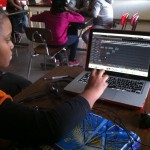 On our seventh meeting at Clairton's CASTLE program students were asked to reflect on the "American Dream" and what it means to them. Then, 5th and 6th graders were given access to Mac Book Pros with which they attempted the Humpty Dumpty Challenge; after learning the basics of the audio editing software Adobe Audition, the students were tasked with reassembling various Disney songs that had been divided into 15 separate clips.

Clairton CASTLE: What I’m Going to be for Halloween & More Editing 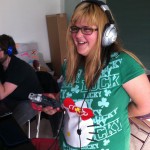 On our 6th meeting, students at Clairton's CASTLE program wrote about Halloween and what/who they're going to dress up as. It's looking like the streets on October 31st will be filled with primarily Zombie Princesses. They then learned more about the power of audio editing!