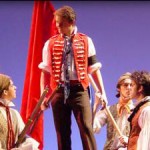 Pittsburgh Musical Theater previews Les Miserable, the timeless story of revolution and love that has touched lives around the world. This production combines the students of PMT's Richard E. Rauh Conservatory with CAPA's 80-piece student orchestra.

Prime Stage’s founder, Wayne Brinda and some cast members, stop by our studio to read a scene from the play. All perforances of Prime Stage’s 2009/10 season are presented at …

The cast of Aladdin, now at The Gemini Theater, are LIVE in the SLB studio for a sneak-peek of opening night and this season’s other upcoming productions.