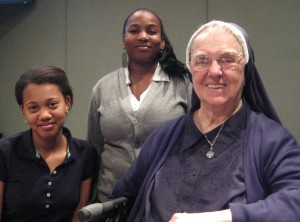 Allegheny Voices is a project that was born of a chance meeting and a casual conversation about Andy Warhol’s love of ordinary discourse. Armed with a tape recorder, Andy would record for posterity, the type of conversation that most of us would have and then soon forget. Inspired also by Warhol’s Interview magazine, the potential for an audio-visual collaboration between The Saturday Light Brigade and The Andy Warhol Museum was seen. It was decided that older North Side residents would be the perfect interviewees to share their stories and memories of growing up in the same area, albeit a different era, with 8th grade students at Manchester Academic Charter School (MACS).

Pairs of students interviewed various North Side residents, gaining insight into North Side history and benefiting from listening to their experiences. This new-found knowledge instilled the sense of community, interconnectedness, pride and historical perspective to student’s lives on the North Side, that it was hoped the project would indeed bring.

The students helped to transcribe their interviews and designed all of the pages in which to showcase the interviews for the Allegheny Voices magazine.

This project was made possible with support from The Grable Foundation as part of the Charm Bracelet Fund and a grant from Manchester Academic Charter School.

Interviewed by Monyette Lina Flowers and Lyberti A. Bruce