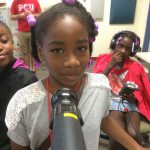 On our third day, campers were inspired by Naveah's impromptu animal story to write and record their own versions. 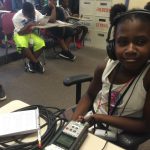 On their second day of Summer Dreamer's Academy, radio campers wrote and recorded a letter to their future selves! 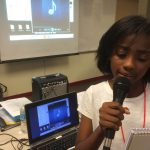 And so begins a new summer of Radio Camp! Our first day was jam packed with fun activities; we met our campers, introduced them to the basics of audio production and then recorded them, asking: "What are three (or more) unique, crazy, awesome things about you?"

And so Radio Camp 2015 comes to an end. Radio Campers experienced a sendoff loaded with snacks, drinks and good vibes. After receiving a CD with all of their recorded audio, they then watched a slideshow of photos taken over the whole 28 days of camp. It was a fantastic ride, made all the more awesomely perfect by the campers we met and worked with!

August 4, 2015 – 11:31 am | 989 views slbradio Neighborhood Voices user
After putting the finishing touches on their DIY microphones, radio campers then got to test them using a mixer, alligator clips and a deep, bellowing voice. Campers then got a chance to play with a "Voice Changer," singing songs as Darth Vader or rapping as Alvin and the Chipmunks!

July 28, 2015 – 11:18 am | 1,016 views slbradio Neighborhood Voices user
Radio Campers at Summer Dreamer's Academy learned how they worked, then go to build their very own microphone out of household materials! Using just two magnets, a length of copper wire, three washers, a nut, a bolt, a plastic straw and a cup, campers created an amazing piece of technology!

On our twentieth day, campers were asked "What are some of your favorite things about Summer Dreamer's Academy?" Answers varied from: "RADIO CAMP!" to "EVERYTHING!"

July 22, 2015 – 10:55 am | 977 views slbradio Neighborhood Voices user
After having to make some educated guesses about electricity, campers not only got to learn about electrons, circuits and conductivity, they experienced these things first hand thanks to the "Makey Makey," an invention kit created by JoyLabz LLC that turns everyday objects into buttons for computers. From becoming a human piano to playing Pong on oranges, students experimented with basic circuit building.

On our fourteenth day we asked our Radio Campers what they knew about electricity. They were also given the opportunity to write a "silly" explanation of this shocking phenomenon.

July 20, 2015 – 3:28 pm | 937 views slbradio Neighborhood Voices user
Campers were so enamored with our handheld digital recorders from the early days of camp that we decided to bring them back! But, instead of just interviewing, they conducted a professional recording session as well as recording the various environmental sounds surrounding them.