Articles in The ZONE 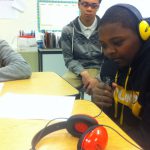 Students pondered an eternal question: who would win in a competition of strength, Superman or the Flash? Brandon, who chose the Flash for some reason, also provided his own percussion as a music bed for his recording. 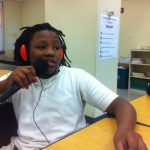 On May 7th, students at The ZONE wrote and recorded their second Mad Lib, this one about a curious dog. Their favorite exclamation: "OMG!" 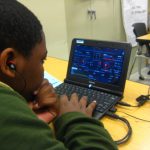 Students at The ZONE were introduced to the audio mixing software, Virtual DJ Pro, with which they used to alter various Pop and Disney songs, leaving their own personal mark on the likes of Frozen's "Let It Go," Arrested Development's "Tennessee" and The Clash's "I Fought the Law."

The ZONE: When I Grow Up and Other Stories 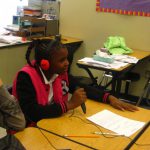 The ZONE radio clubbers wrote and recorded a quick story about what they want to be when they grow up. After recording we used a DAW (Digital Audio Workstation) named Logic Pro to make beats along with their story recordings. 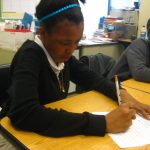 The ZONE's Radio Club-ers were tasked with answering these very difficult questions: "What would you do if, while at the Zoo, all the animals were released and an aggressive panda cornered you? What if you yelled 'Stop!' and suddenly discovered you could speak to animals?" 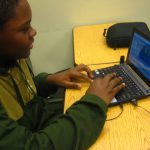 The ZONE's Radio Clubers received access to Netbooks, with which they assembled a Mad Lib from previously recorded audio fragments. Most recordings had transformed into the Beatle's "Revolution 9"-esque mishmashes before they'd even unleashed the "Pitch Bender" feature upon them. 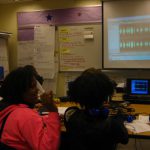 Students at The ZONE's Radio Club got a chance to edit some of their own audio. After virtually obliterating some annoying mouth noise and demolishing numerous mispronunciations they discovered the "Pitch Bending" function. Needless to say, they loved making people sound like Sloth from "The Goonies."

Students at The Zone's Radio Club received a grammar refresher with a Bowling-oriented Mad Lib. Their favorite noun: "Booty."

The ZONE: Changing Our Communities 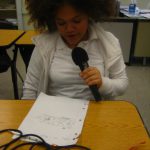 Our third and fourth meetings of The ZONE's 2nd semester Radio Club focused on communities, the issues prevalent within them and the ways in which we can help change them for the better.

The ZONE: Three Things About Me 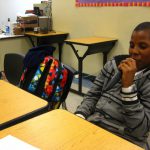 After a several week break due to unfortunately inclement weather, we were finally back at The ZONE this week, and just in time to meet some brand new radio-club members. Students wrote and recorded these pieces describing themselves in three ways.