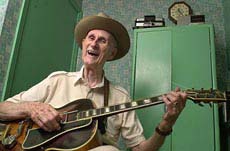 Thomas Hoyt “Slim” Bryant passed away at age 101 on May 28, 2010.  Born in Atlanta, he came to Pittsburgh in 1940 and, together with his band The Wildcats,  soon became a popular country music performer on stage and on the KDKA Radio Farm Report.   While a local treasure, Mr. Bryant had a national following and a hit record (“Mother, The Queen of My Heart”) recorded by Jimmie Rodgers and covered by manyartists, including Arlo Guthrie, Merle Haggard, and George Jones.  He also was the last surviving musician to have recorded with the legendary country singer Jimmy Rodgers, who died in 1933.