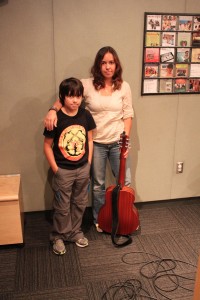 A recent import to Pittsburgh, having been raised in Austin, Texas, Jenny Morgan has received songwriting awards from the Kerrville Folk Festival and the Woody Guthrie Folk Festival. Expanding a repertoire that spans many genres and themes, she is now recording her third album, performing with Musicians with a Mission, and generally finding a home in the Pittsburgh music scene. We were thrilled to have Jenny join us this past week performing some of her original songs, including one piece with her son Phineas, live on SLB.

More information can be found at here