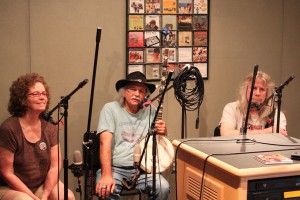 From 7/13/13: Rik Palieri and George Mann with folk songs as we help kick off their 5-week journey re-creating the 1941 tour made by The Almanac Singers (a legendary group featuring Woody Guthrie, Pete Seeger, Lee Hays and Mill Lampell) on the morning after their 7/12 opening concert with Anne Feeney at United Steelworkers (Five Gateway Center) with doors opening at 7 pm and music starting at 8 pm