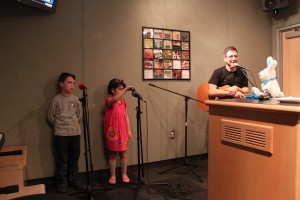 Singer-songwriter Todd Burge shares with us songs from two new albums, ‘Character Building’ and ‘Building Characters’, to be released simultaneously on April 23rd. Todd gets some help from his son, Will, and his daughter, Sophia, when performing tracks from ‘Character Building’, his first record aimed specifically for children and families. Hear the Parkersburg, West Virginia native’s interview and performance, live on SLB.