YES: Luminari “I Want to be an Ambassador” Program 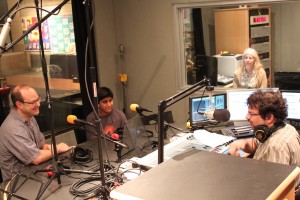 The Luminari “I Want to be an Ambassador” program is an intensive, seven day summer program that is designed “to help teens master the skill sets and character traits of a successful Ambassador… especially the vital art of diplomacy.” The program meets in Pittsburgh at the Heinz History Center and culminates with a two day trip to Washington D.C. where the camp will visit cultural museums, foreign embassies, as well as the U.S. State Department. Today we are joined by Rohan, a soon-to-be 8th grader at Dorseyville Middle School, who won an essay contest and earned a scholarship to participate in this year’s program. Rohan fills us in on some of the fascinating subjects that he has learned so far in the program, including conflict resolution, world religions, and the subtleties of cross-cultural communication. Rohan is joined by Luminari staff member Rick Tony, the director of this year’s Ambassador program.

More information can be found at http://www.luminari.org/I_Want_to_be_an_Ambassador!.html