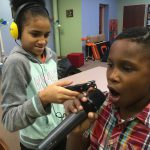 Students at Clairton were asked what they're looking forward to most this holiday season. After, they received more chances to experiment with handheld digital recorders, voice changers and wireless microphones and keyboards. 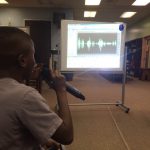 Students at Clairton wrote and recorded these pieces about where they live before receiving a crash course in audio editing with some help from a projector, wireless keyboard and mouse. They then were asked the all-important question: "Are you excited for the new Star Wars movie???!!!" 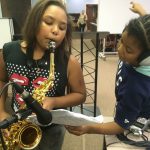 Students at Clairton were asked, with the holiday only days away, what were some of their favorite things about Thanksgiving. Have a great holiday vacation everyone! 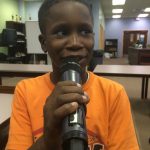 This week Clairton students got a chance to express themselves through a number of creative writing project! One involved a desperate, Dr. Doolittle-esque bid for survival, one about future employment, and another concerning Veterans and their service. Two students even wrote an original song which they sang as a duet! 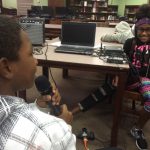 Students at Clairton's CASTLE after school program were asked to describe the very first time they ever learned, accomplished or experienced something meaningful in their lives.

A new school year has begun and with it a new year of Radio Club at Clairton Middle School's CASTLE program! As an introduction to radio production--as well as to each other--5th, 6th, 7th and 8th grade students were asked to answer this writing prompt: "In three words, how would others describe you?" 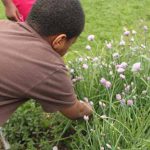 In the Spring of 2015, students in the CASTLE program at Clairton Middle School worked with Sense of Place Learning and Grow Pittsburgh to build, plant and maintain a raised-bed schoolyard garden.

March 25, 2015 – 4:01 pm | 973 views slbradio Neighborhood Voices user
Over the course of this semester, Elementary and Middle School students in Clairton's CASTLE program have been working hard each week creating awesome audio recordings and, to celebrate all their hard work, on this, their final day of Radio Club, students got to enjoy an awesome party!

March 18, 2015 – 12:27 pm | 964 views slbradio Neighborhood Voices user
Students at Clairton's CASTLE program, after learning how they worked, got to build microphones out of household materials! Using just two magnets, a length of copper wire, three washers, a nut, a bolt, a plastic straw and a cup, campers created an amazing piece of technology!